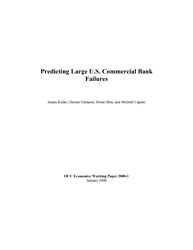 The present study applies empirical methods to the problem of predicting large U.S. commercial bank failures. Because of sampling limitations, scant research has examined the feasibility of using computer-based early warning systems (EWSs) to make such predictions. In the late 1980s and early 1990s numerous large banks failed in the United States, enabling us to collect a sample of 50 failed banks with more than $250 million in assets as well as a matched sample of 50 non-failed large banks. These samples were split into original and holdout samples of different sizes. Both the parametric method of logit analysis and the nonparametric approach of trait recognition are employed to (1) develop classification EWS models based on the original samples and (2) test the predictive ability of these models using the holdout samples. Both logit and trait recognition performed well in terms of classification results. However, over the holdout samples, trait recognition outperformed logit in a variety of tests, including overall accuracy, large bank failure accuracy, weighted efficiency scores, and stability using data from one year before, as well as two years before, failure. Other results from the trait recognition models reveal that complex two- and three-variable interactions between financial and accounting variables contain additional information about bank risk not found in the individual variables themselves. We conclude that nonparametric EWSs can provide valuable information about the future viability of large banks.